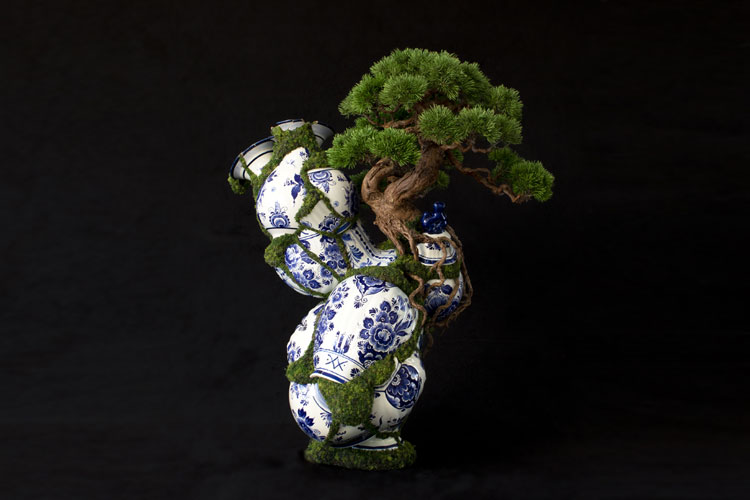 In its essence, art reflects life itself; capturing a moment in time, with the unmistakable signature of the artist.
For me, the individuality, the esthetic eye, the technical skill, but also the persevering with the search for an own language, define the quality of an artist.

The work of Patrick Bergsma (1965) finds it origin in postmodernism, a broad movement in which a multitude of styles, techniques and symbolism come together, with themes such as criticizing systems, relativism, and the tension between nature and culture.
I have been following Patrick’s work since 2007 and although it immediately struck me as completely authentic, it took some time before I saw clearly what it is he wants to express. In his present work everything that he has mastered over the years, comes out compressed. As if he was always on his way to this moment, to this form.

Patrick’s parents ran an antiques shop and thus, at a young age, he developed an eye for objects with a history and the craftsmanship with which they’re made. Along with that, grandfather Bergsma was a connoisseur and avid collector of German porcelain, causing him to, open-mindedly, develop a fascination for it.
Not only the shapes for which porcelain has been used throughout the centuries were of interest to him, like tiles, dishes, vases and sculptures; the little scenes depicted on them, also appealed to his imagination. In his early work, the playing with all these elements is clearly visible.

Along the way he disconnected the elements and studied them separately. Making life-size surrealistic sculptures inspired on 18th century German porcelain miniatures, large panels with scaled up versions of Delftware tiles and three dimensional interpretations of the two dimensional depictions found on Chinese and German porcelain. Small floating islands with compact own realities. After that he stepped away from porcelain to focus completely on floating sculptures with slightly surrealistic, sometimes dystopian or romantic, intriguing little worlds. There’s always decay and nature regaining victory over what man has created. Patrick lets nature win, just as it would win in real life, if we don’t interfere. That creative force runs through everything and our own creative force is only temporarily part of it. Everything he makes shows a keen eye for detail and laborious workmanship.

By working on these worlds he became intrigued by bonsai, the Japanese, but originally Chinese art of cultivating small trees in a pot, called penzai there, which aims to perfectly mimic reality in miniature. There’s been a relation between the art of bonsai and Zen Buddhism, known as Chán in China, since the 14th century. The monks brought the hardy little trees that managed to survive in the rugged mountains, back with them to the monastery in order to meditate on the power of nature. Patrick also experiences zen-like meditative moments when working on his bonsai trees. He has developed techniques all of his own and a secret process for making them. They’re indistinguishable from real trees. He makes use of coconut fiber, polymers, kaolinite and quartz. These last two ingredients can also be found in…Chinese porcelain.

In his current work Patrick makes sculptures from broken antique ceramics, among other things, original 17th century Kraak- and early Delftware, with his handmade bonsai trees growing right through them. This way, the craftsmanship and broken art from past centuries live on in new works of art. They appear to be archeological finds that have been carefully pried loose from a forgotten Asian landscape. Bits of solidified time that, strangely enough, seem to be alive. The contrast between something as refined as age-old porcelain, once a symbol of wealth, broken and mended, pushed apart and held together by the imagined vigor of nature, breaths hope. At the same time it is showing us the temporary nature of our existence. They are lively, striking and balanced works that’ll never bore. Everything Patrick Bergsma has discovered and developed on the journey he is on, comes together harmoniously in these small masterpieces. 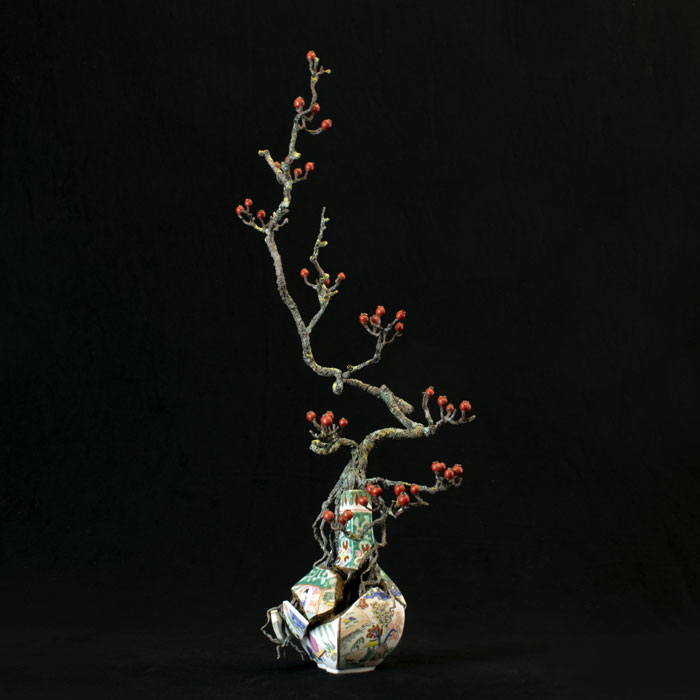 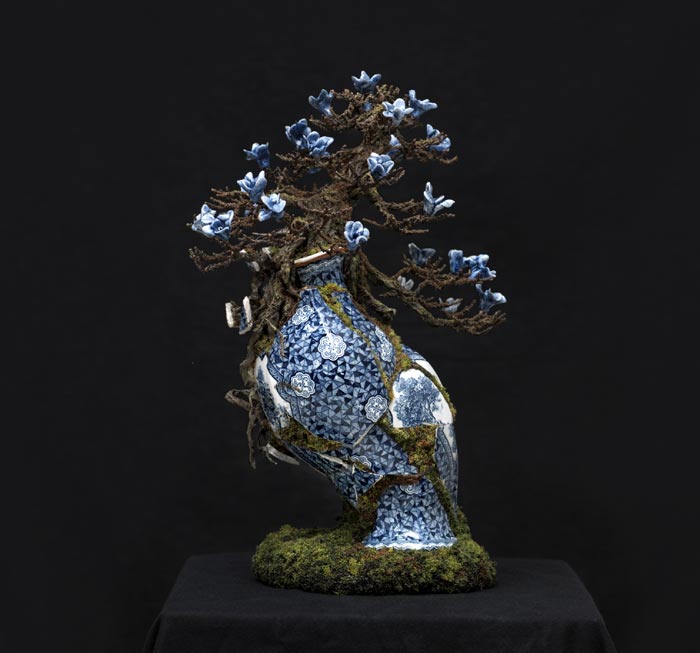 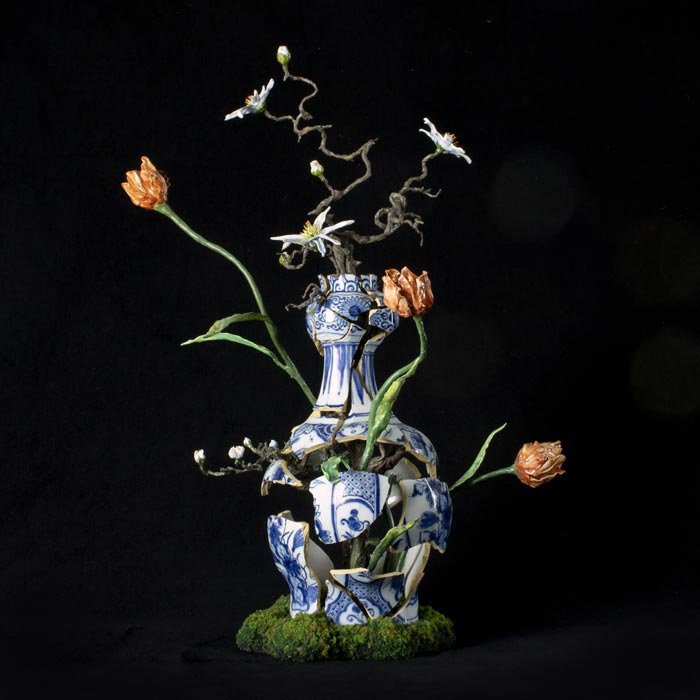 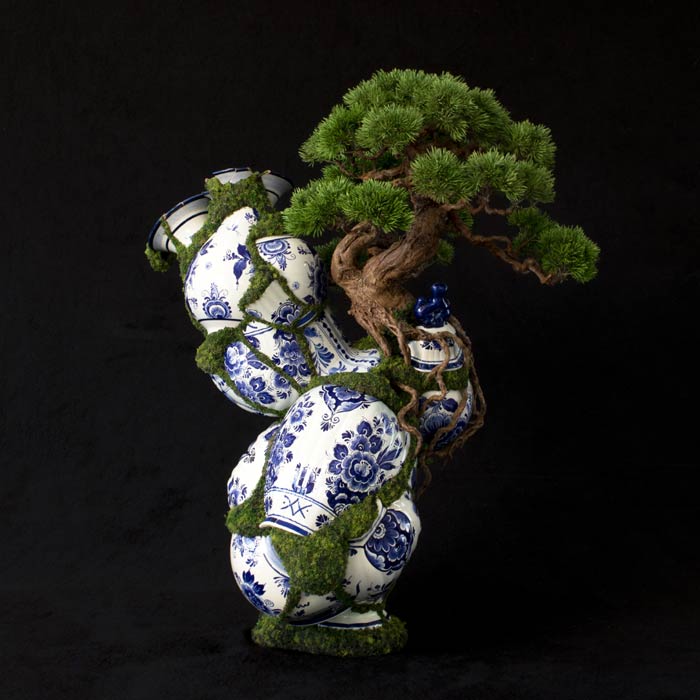 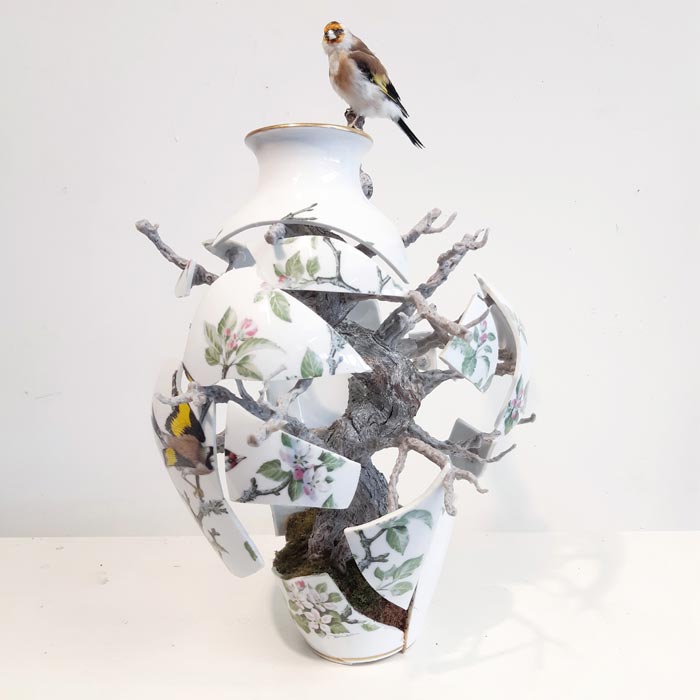 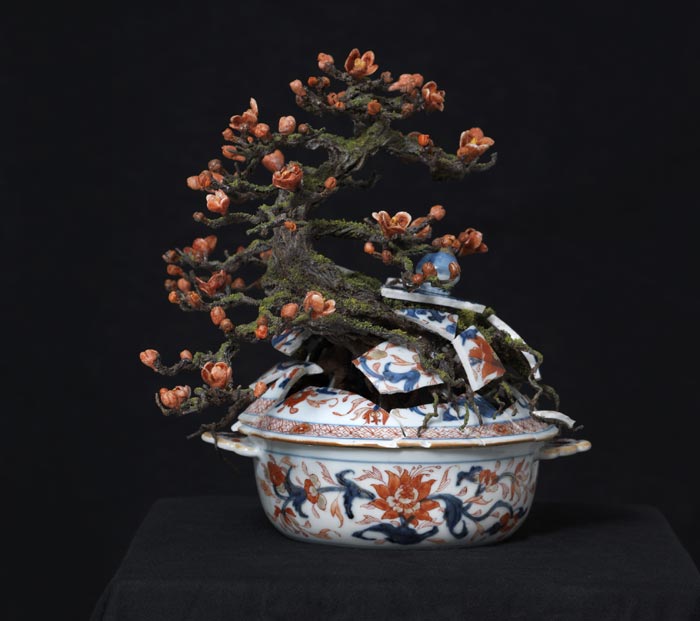 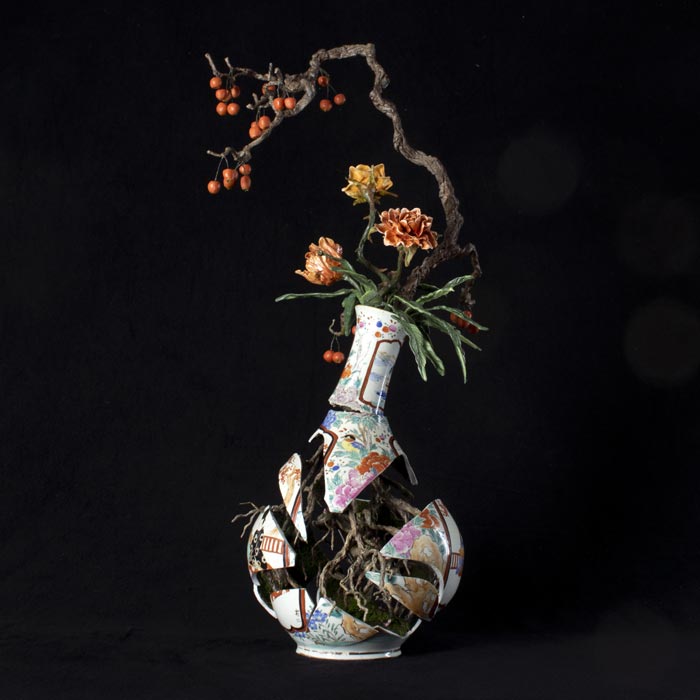 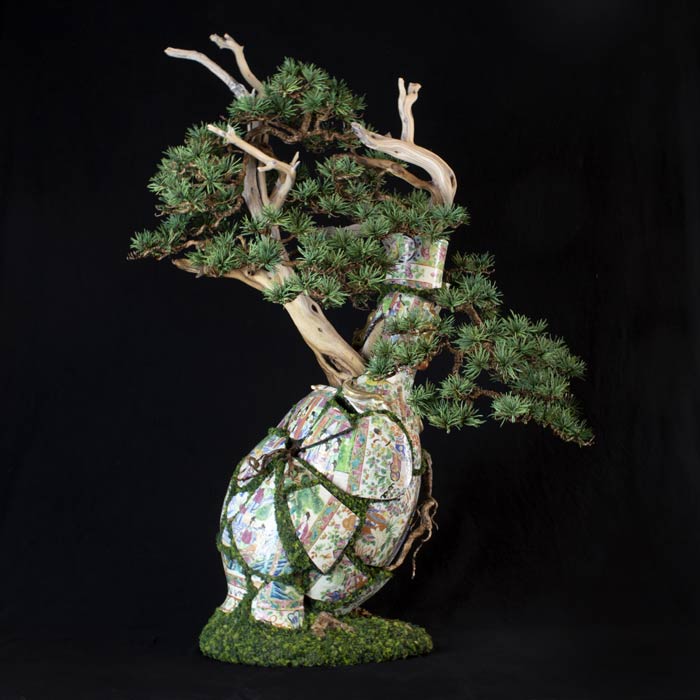 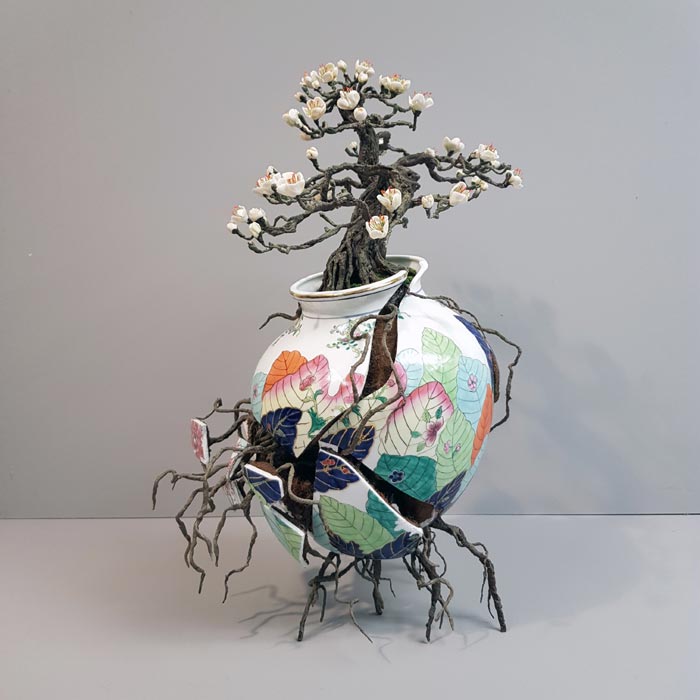 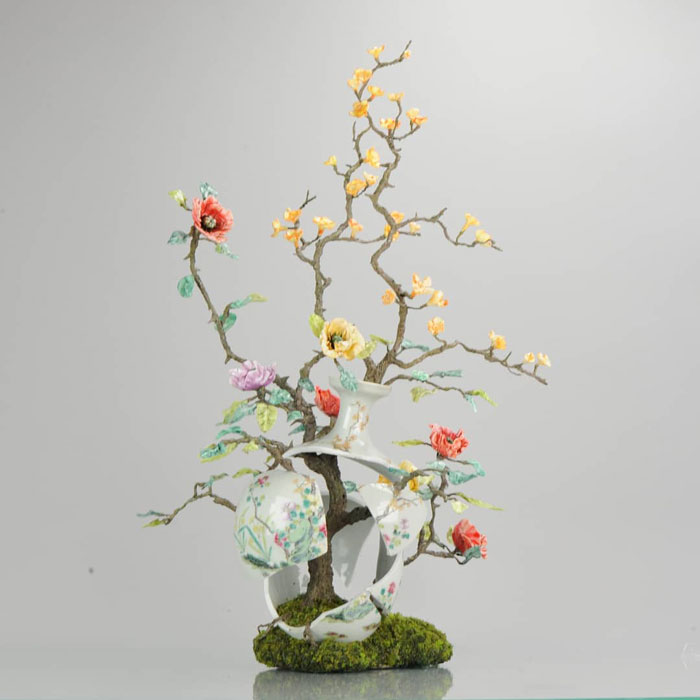 Patrick Bergsma studied at the Royal Academy of Art (KABK) in The Hague (1991-1996).
His work can be seen in leading galeries in the Netherlands. Internationallyhe’s had exhibitions in New York,
Los Angeles, Riga, Brusselsand manyfold in Germany. Works of his have been acquired by, among others:
Stedelijk Museum Alkmaar, Museum Prinsenhof Delft, the Ministry of the Interior and Kingdom Relations of the Netherlands, Accenture, KPMG, ABN-AMRO, Vrumona, KPN and private collections in many countries.
He was nominated for the 2010 Rabobank Cultuurprijs. 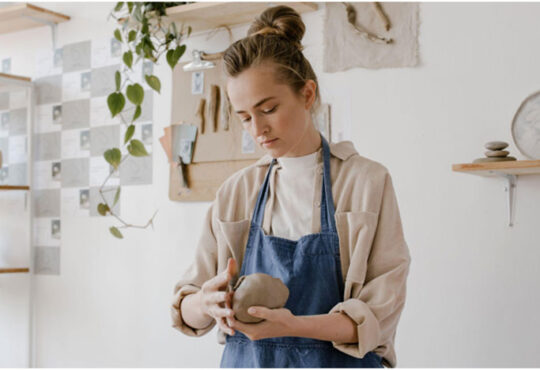 Sculpting 101: How Do You Get Started? 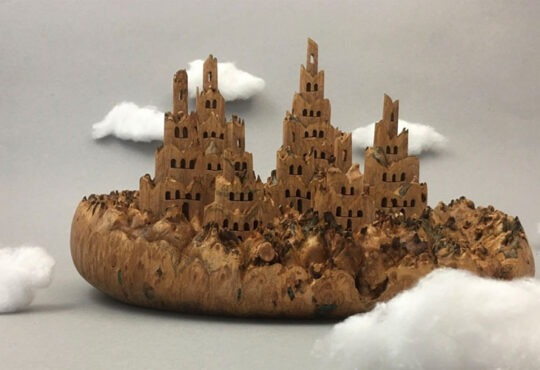 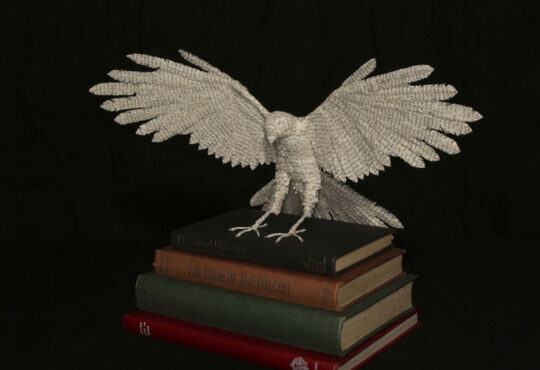 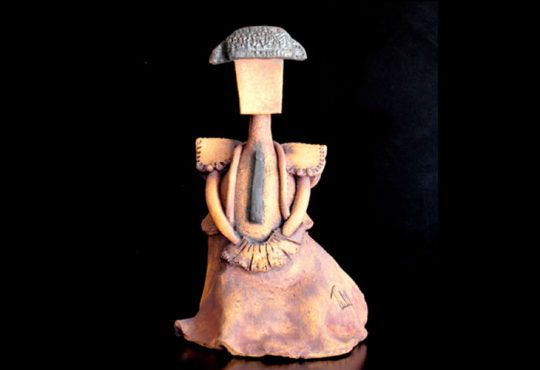 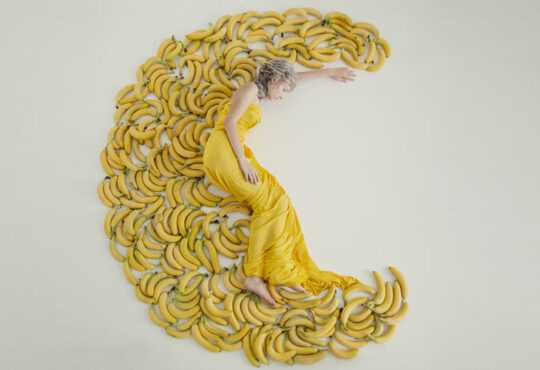 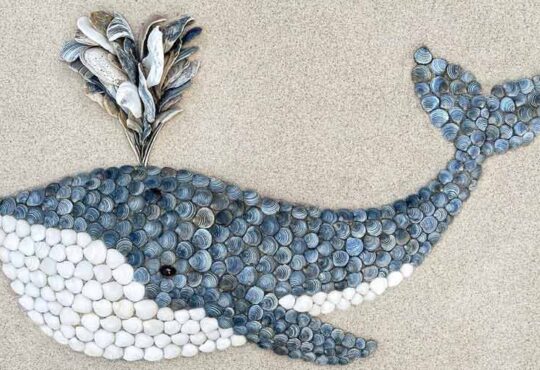 Beautiful Animal Sculptures From Seashells Found at the Beach