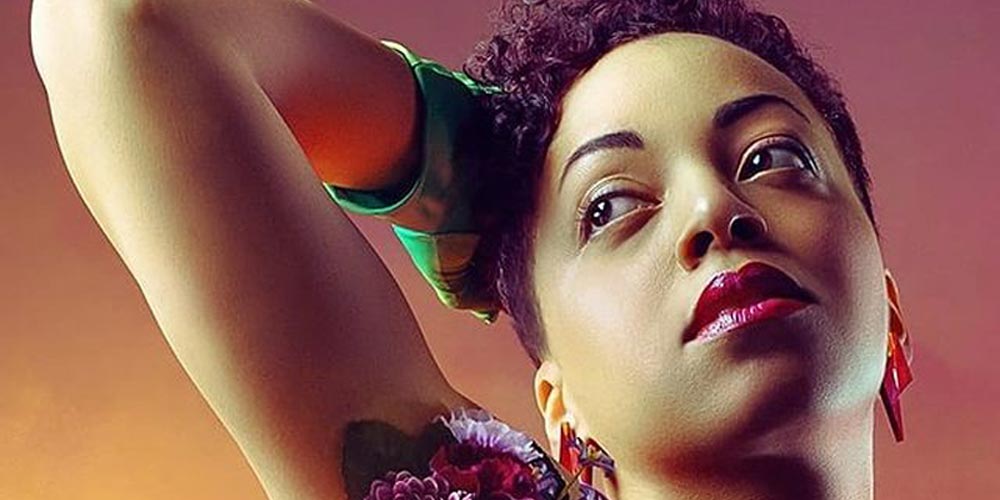 Emilie Derville is a Belgian fine art photographer and graphic designer; specializing in costumed and staged portraits, she composes self-portraits and portraits like paintings; reality is then “augmented” and manipulated through retouching.

Pieces of master paintings sometimes slip into the decor and make the link between the inspiration and the final work, the models become characters laden with symbols and reinterpreting ancient myths.

Female figures have a predominant place in her universe and evolve in an imaginary world that is sometimes enchanting, sometimes nightmarish. She draws her inspiration mainly from classical and modern painting, from mythologies around the world and from literature. ~ @studioderville 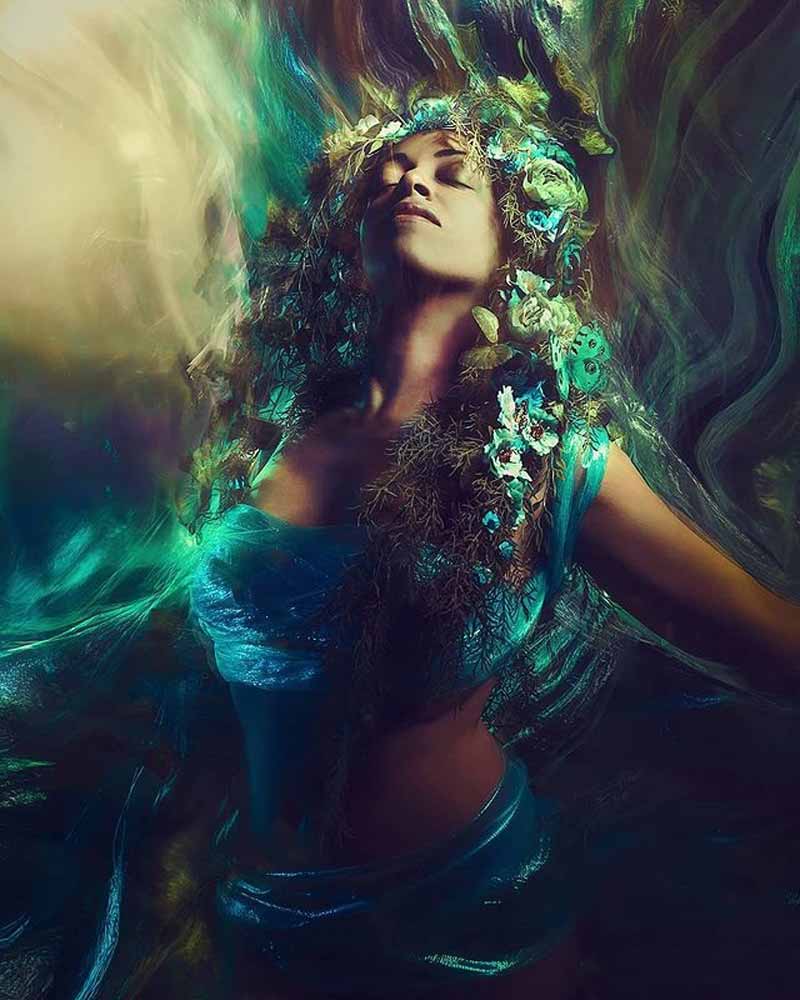 Aquatic beings
This portrait taken from a series on the theme of water and the fantastic creatures that inhabit it.
I worked with long exposure times to create movements and reflections similar to water, then I reworked the picture with Photoshop. 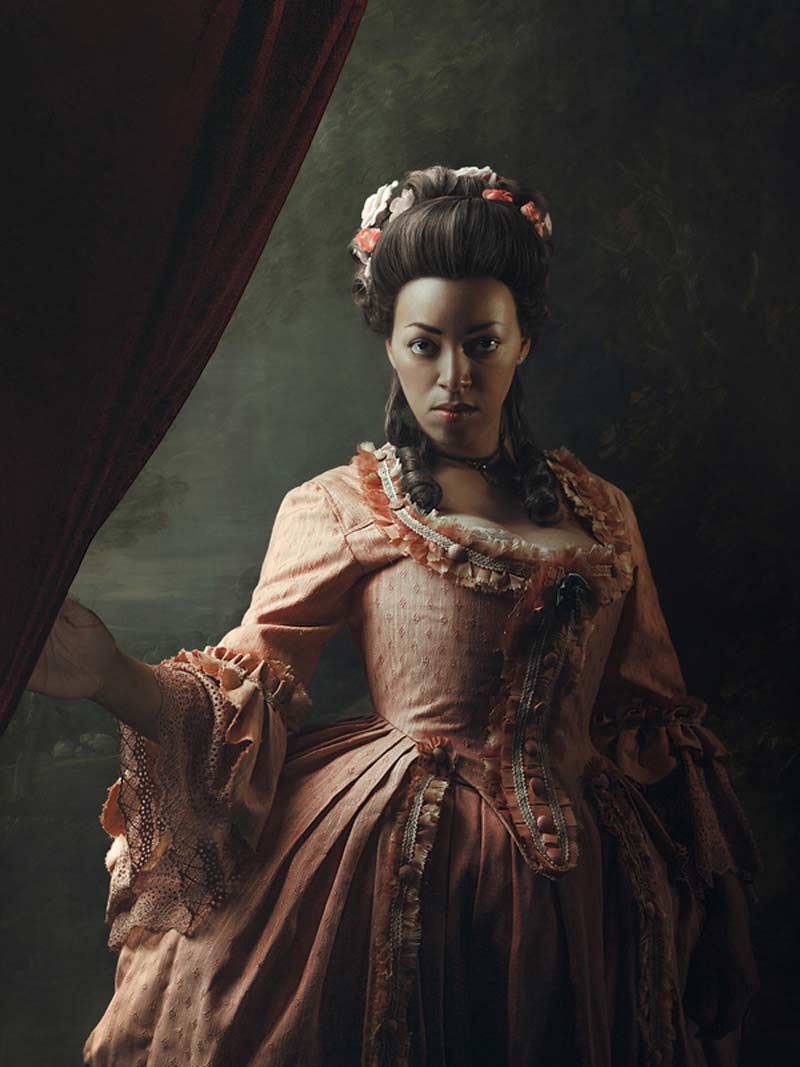 Time of Flowers
Self-portrait
In my garden, pink and yellow peonies grow. I love these huge flowers so heavy that their splendor is turned towards the ground …
They go perfectly with my English which is one of my most ambitious costumes; a complete 18th century outfit that I sewn 8 years ago.
Wearing this dress again makes me feel like a duchess and makes me want to photograph all those who take dust in my wardrobes…

Makeda
I was inspired by an excerpt from the Song of Songs to represent Queen Makeda; “I am dark, yet lovely, O daughters of Jerusalem, like the tents of Kedar, like the curtains of Solomon.”
The jug she carries on her head symbolizes the water drunk in Solomon’s palace marking the breaking of their pact. 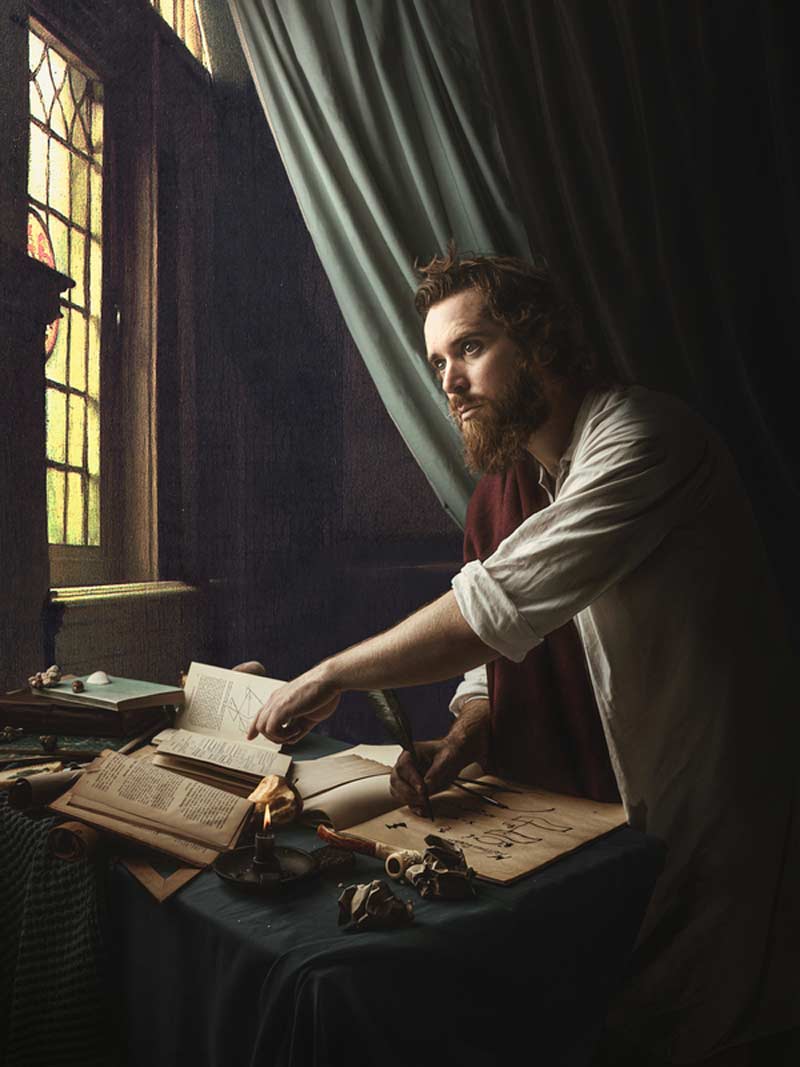 The Mathematician
Tim is a mathematician that I met via Reddit; he ordered his portrait from me, explaining to me that he wanted to be represented in the manner of scientists of the 17th century.
He already had good references in mind and I was inspired among others by paintings by Johann Vermeer and Gerrit Dou to represent him. Part of the background comes from a painting by Vermeer, it’s up to you to find it! 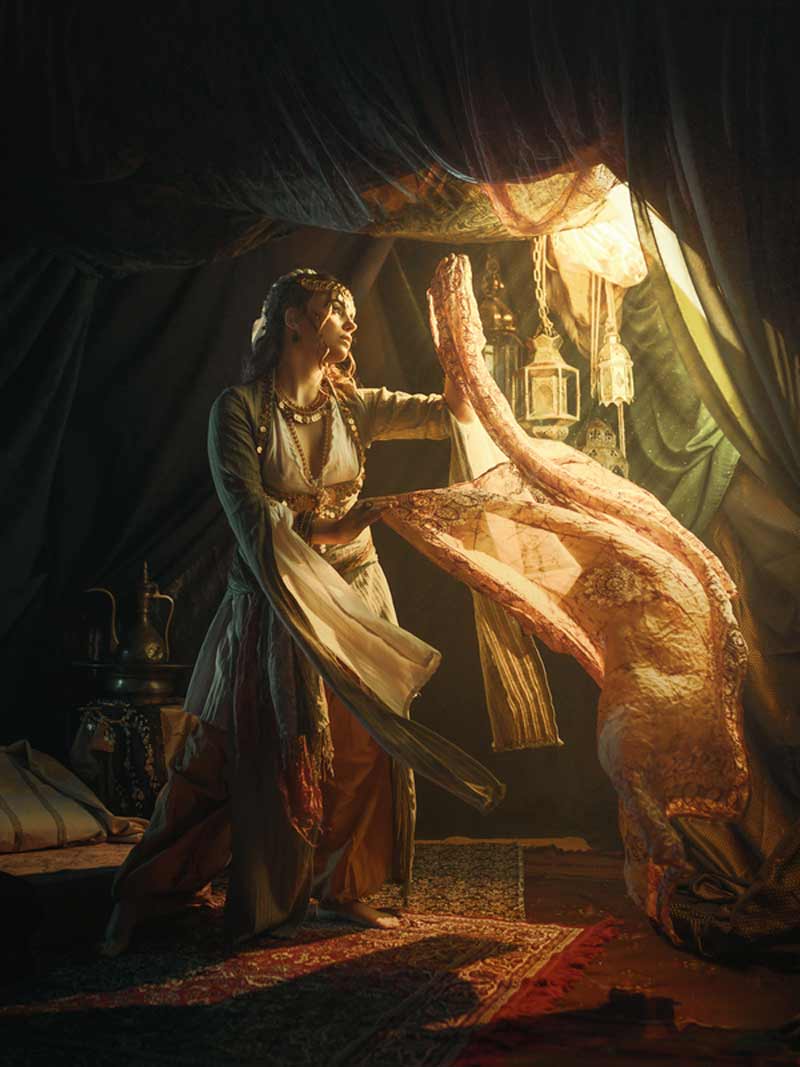 Orientalism – The Ghawazee dancer
This project of portraits is inspired by Orientalist paintings; the development of each portrait plunges me into the imagination of the painters and their fantasies linked to a completely fantasized east that few have actually visited or known…
I do not know when this project will end or where it will lead me, but it stimulates my imagination… 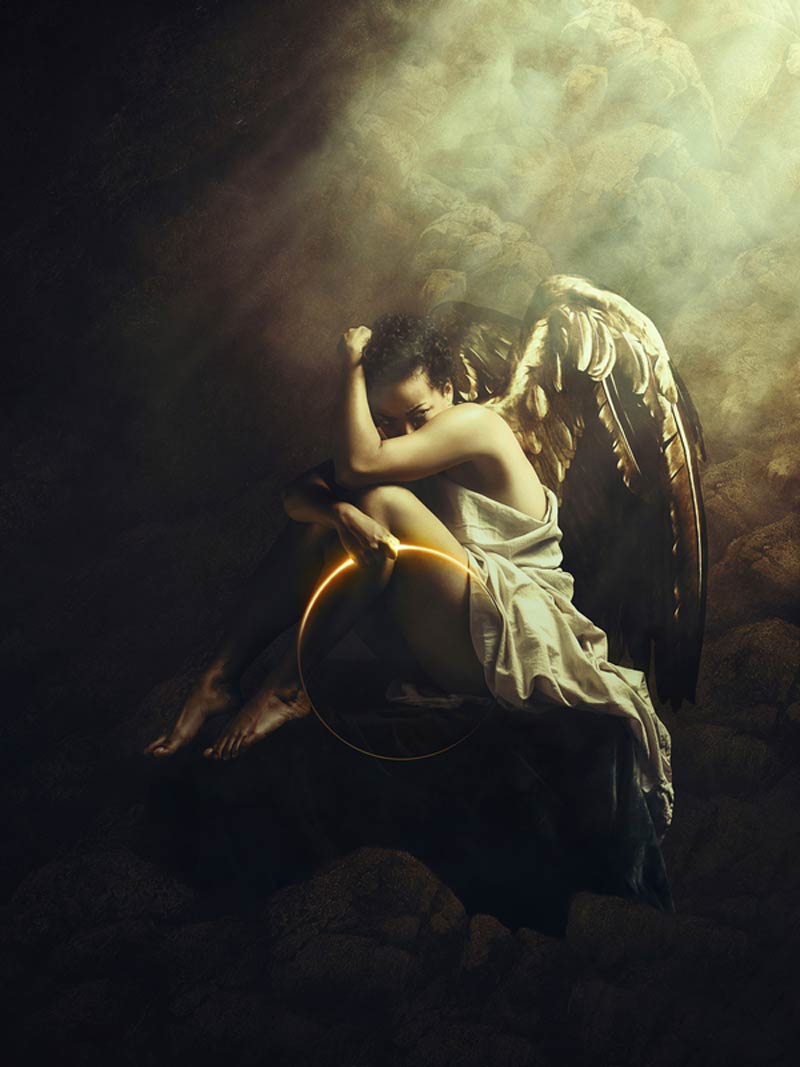 Fallen Angel – The dark anger
Self-portrait
Lucifer, fallen from the sky ruminates in the bowels of the earth.
His halo materialized in a circle of metal symbolizing that he had lost his divine aura.
His fist clenched on the circle, heats it up and makes it glow, like his anger.
For this self-portrait from a triptych, I used the wings of the angel of Caravaggio in the painting “Amor Vincit” and a cavern landscape of John Wright of Derby. The expression is inspired by the Fallen Angel of Cabanel. 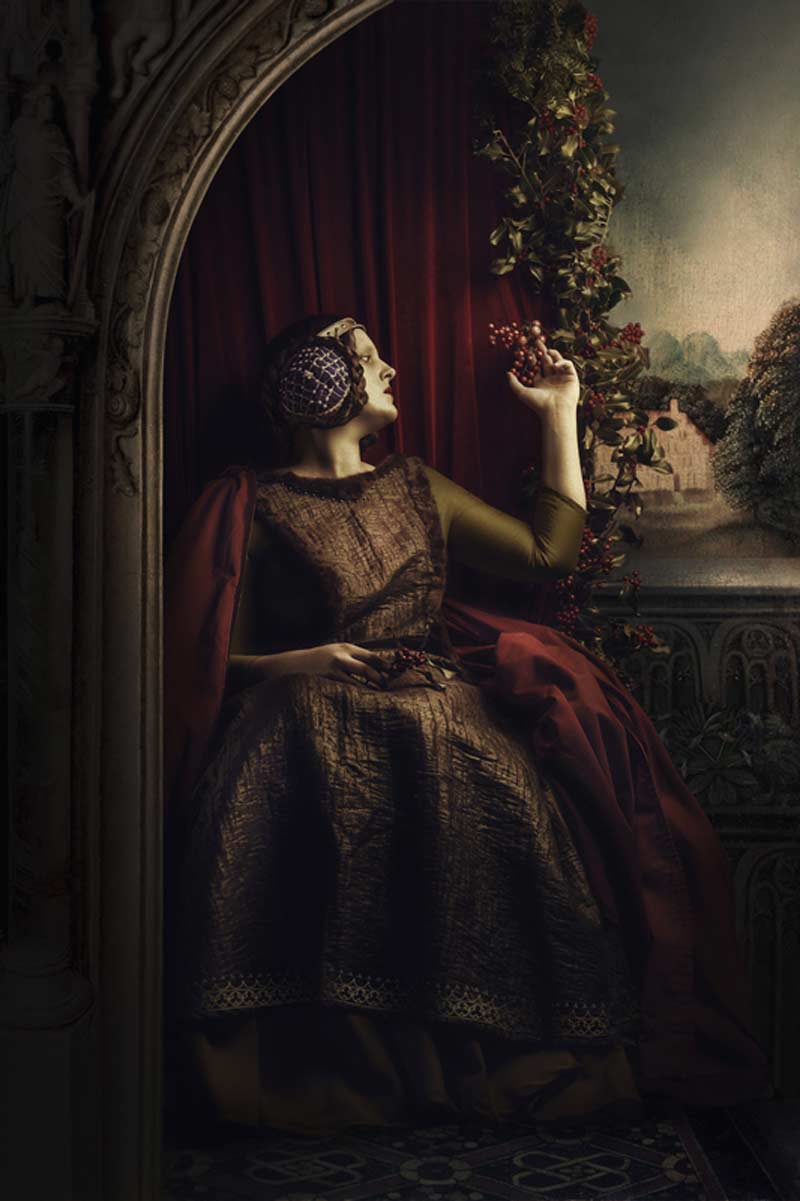 The Virgin with Holly
To compose this portrait, three paintings were needed: Jan Van Eyck’s Virgin of Lucca fort the ground), the Virgin and Child and the two angelic musicians of Hans Memling for the column, and the Virgin enthroned; painting of the Bruges School for the background. Finally, the pattern at the bottom of the dress is copied from the dress of the Virgin and the child of Rogier Van der Weyden.
Holly is a symbol of eternity because it is an evergreen plant, it also represents the promise of next spring. 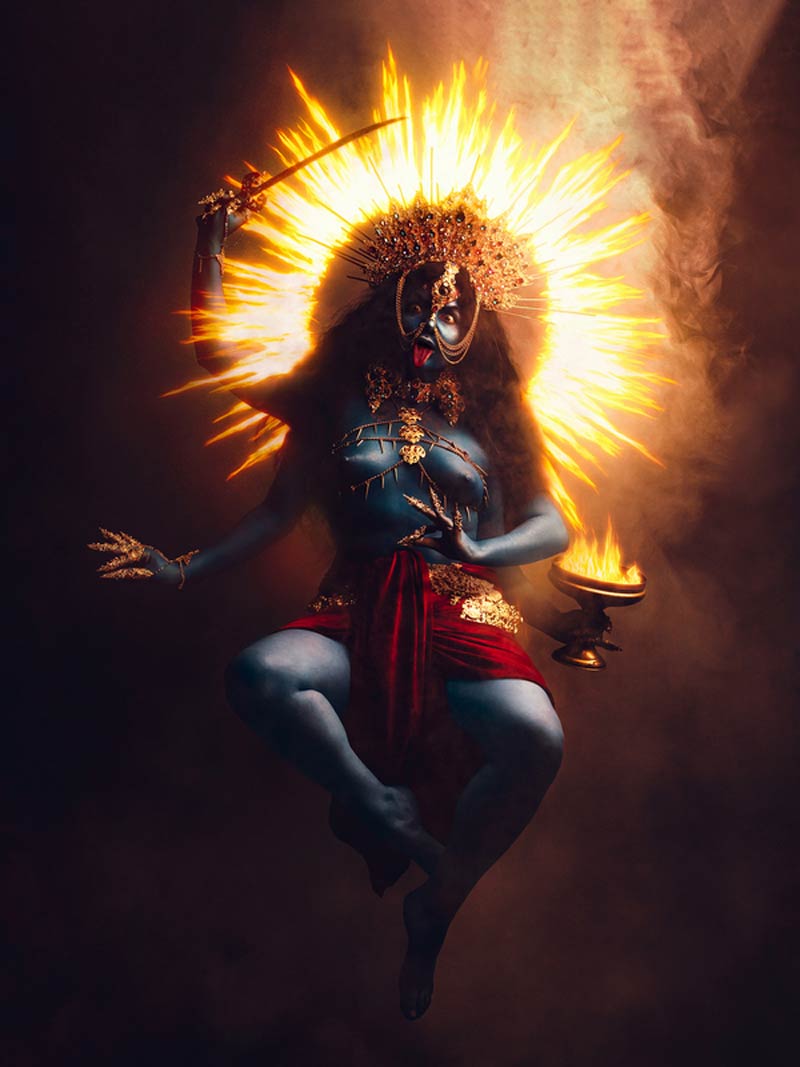 KALI
Goddess of destruction, transformation and preservation; Kali destroys ignorance and keeps the world in balance.
If you worship Kali, you will be free from the fear of destruction … I think we all need Kali a little bit right now!
Here, I have represented it in all its power; flamboyant, both calm and ready to strike in her floating pose. 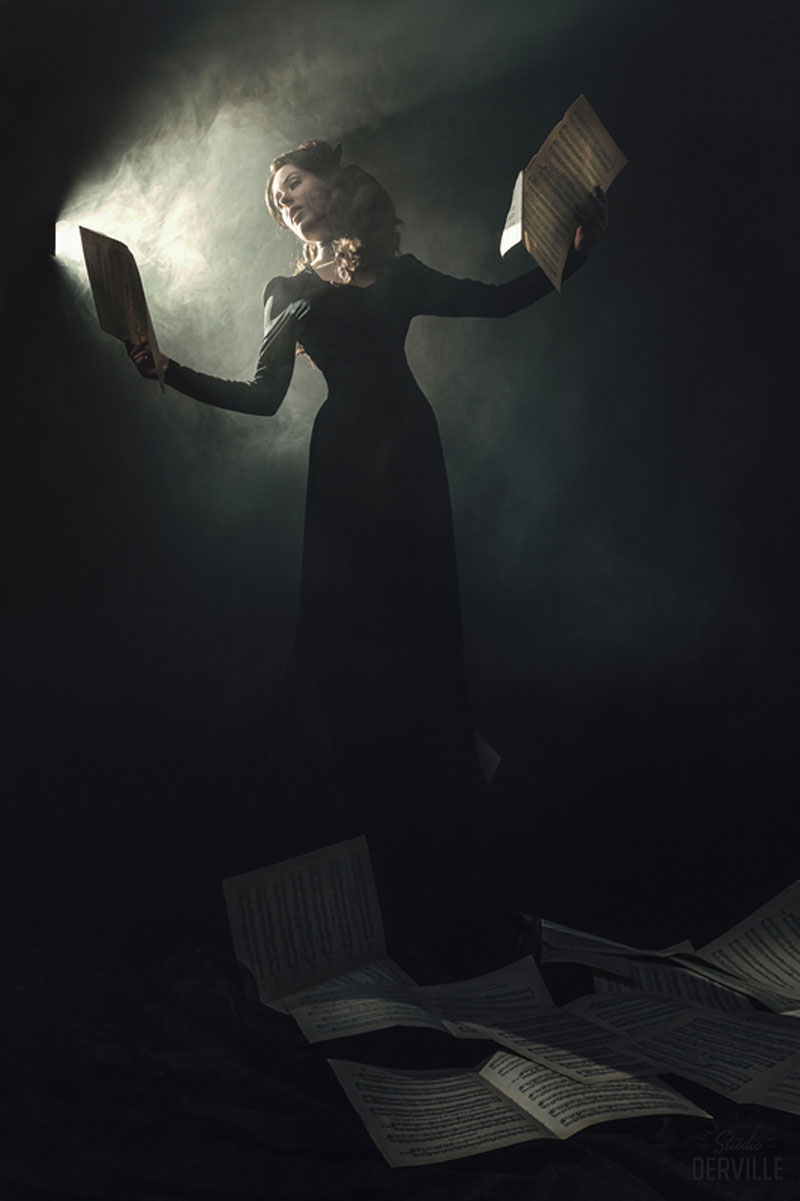 DIVA
When Axelle offered me a collaboration, I wanted to work on a series of portraits based on her passion for singing; by representing her in the guise of a Diva, an icon admired, desired, inaccessible and sometimes cursed.
I worked on a rather minimalist staging that leaves plenty of room for the model; its imposing stature due to its oversized dress and the low angle, gives the impression that it overlooks us. The smoke and the spot with its violent light are there to recall the atmosphere of the scene and create a dreamlike mood. The partitions at her feet bring an extra touch of light and recall the study, rehearsals and work necessary to achieve the coveted status of a Diva… 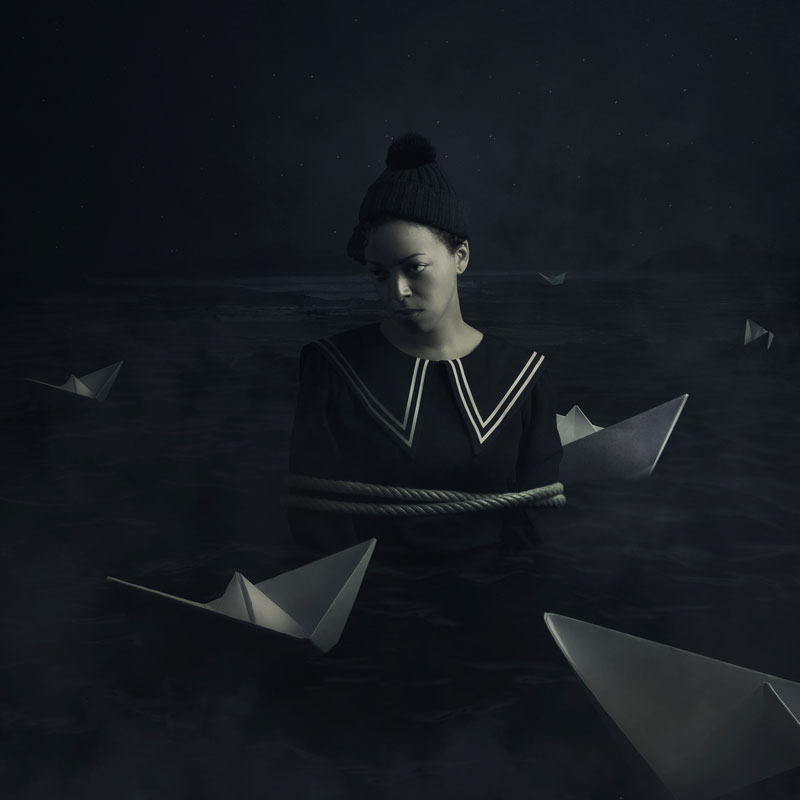 Nocturnal Sailor
Self-portrait
I wanted to represent the solitude of a sailor lost in his dark thoughts, in an imaginary sea populated by giant paper boats.
This picture is made from a compositing: the paper boats were photographed independently of the rest, then added with Photoshop. 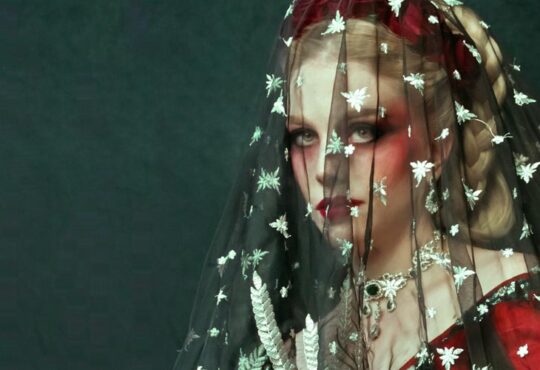 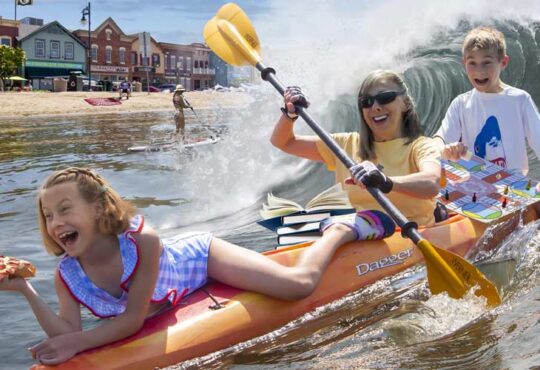 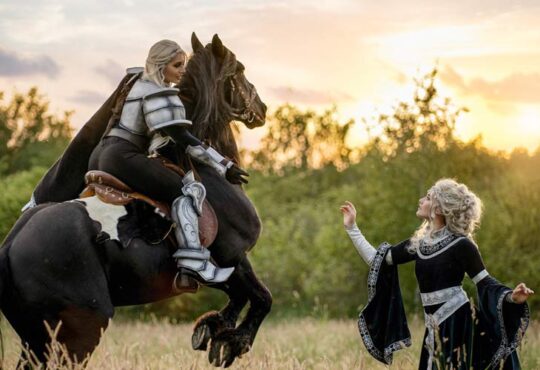 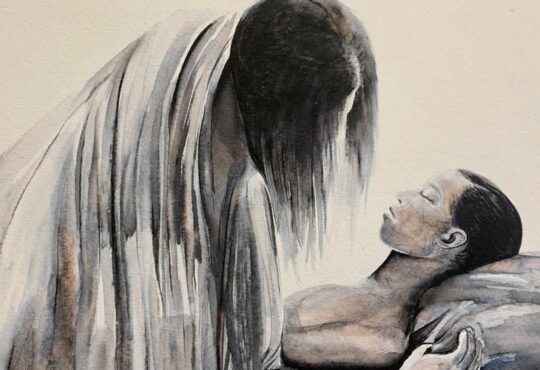 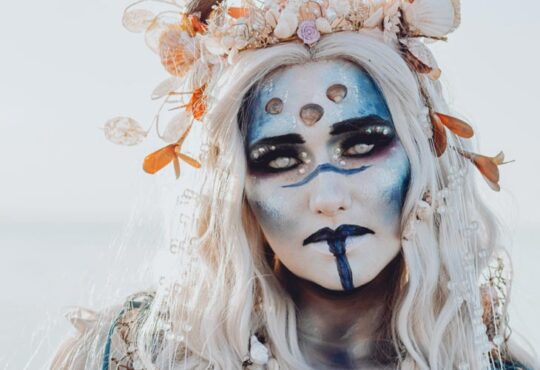 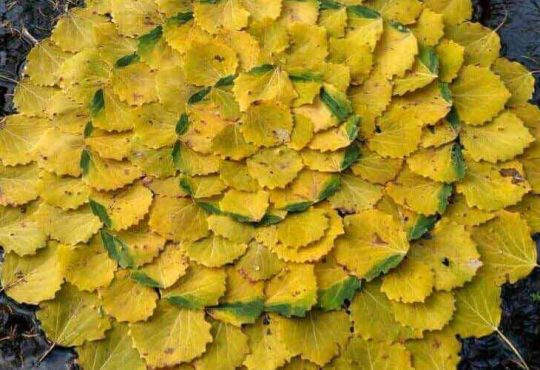